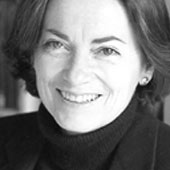 Dolores has shared statements on the following topics, click to explore the topics and see the statements below:

Dolores is the author of Building Suburbia: Green Fields and Urban Growth, 1820-2000, A Field Guide to Sprawl, and several other award-winning books about the history of American landscapes and the politics of place. These titles have been featured in The New York Times, The Wall Street Journal, The Boston Globe and CNN. She is a professor at Yale University and past president of the Urban History Association.

Before Yale, Hayden taught at MIT, UC Berkeley, and UCLA. She is an alumna of Mount Holyoke College, Cambridge University, and Harvard University, where she received her professional degree in architecture.

She has received an American Library Association Notable Book Award, two awards for Excellence in Design Research from the National Endowment for the Arts, the Radcliffe Graduate Medal for outstanding scholarship, the Davidoff Award for an outstanding book in Urban Planning, the Donald Award for feminist scholarship, and many other prizes. She has been a Guggenheim Fellow, and held Rockefeller, ACLS/ Ford, Radcliffe, and CASBS fellowships as well.

Hayden is also a widely published poet. Her new collection, Nymph, Dun, and Spinner, appeared in November 2010. Recent poems appear in The Yale Review, The American Scholar, Raritan, Slate, and The Best American Poetry 2009. She has received awards from the Poetry Society of America and the New England Poetry Society. She will be a DjerassiPoetry Fellow this summer.

Hayden is the widow of sociologist and novelist Peter H. Marris, and the mother of one daughter, Laura Hayden Marris.

My author's web site is www.DoloresHayden.com and there are links to all my books.