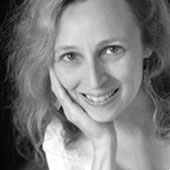 Kate has shared statements on the following topics, click to explore the topics and see the statements below:

KATE LIGHT is a librettist, lyricist and poet in New York City. She is also a professional violinist and a member of the orchestra of the New York City Opera.Her works include the libretto of The Life and Love of Joe Coogan, an opera adapted from an episode of The Dick Van Dyke Show (composer: Paul Salerni); Metamorphoses, a musical-in-progress based on Ovid's life and work (composer, Masatora Goya); the texts of Oceanophony and Einstein's Mozart: Two Geniuses, for narrator and musicians; and four volumes of poetry, Einstein's Mozart: Two Geniuses, Gravity's Dream (Donald Justice Award), Open Slowly, and The Laws of Falling Bodies (Nicholas Roerich Prize, Story Line Press). Her lyrics for the song "Here Beside Me" are heard in Disney's Mulan II.

As narrator of her pieces, Kate has appeared with the Los Angeles Chamber Orchestra, Chamber Music Society of Lincoln Center, Louisville Orchestra, Colorado Chamber Players, and at the American Museum of Natural History in New York City. Her recent reading engagements include the New York Times' "Great Read in the Park," Spoleto Festival USA, Dodge Poetry Festival, Wordstock Festival at Penn State University, and the Woodstock Poetry Festival, among others.

Her poetry has appeared in The Paris Review, Dark Horse, Hudson Review, New York Sun, Washington Post Book World, Feminist Studies, and many other publications, and was featured four times on Garrison Keillor's The Writer's Almanac. Kate has been Visiting Professor at Cornell University and twice at the Musashino Art University in Tokyo.