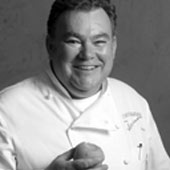 Peter has shared statements on the following topics, click to explore the topics and see the statements below:

Peter owns some of the most renowned & acclaimed restaurants in New York State, all located in the Hudson Valley, north of New York City. Xaviar's at Piermont, The Freelance Cafe and Wine Bar, Restaurant X & The Bully Boy Bar, and X2O Xaviars on the Hudson have all received popular praise and the industry's most coveted awards and accolades which include The New York Times highest rating (Extraordinary), The Mobil Travel Guide Four Star Award, The Dirona Award, Restaurant News Dining Hall of Fame, Wine Spectator's "Best of Award of Excellence", Zagat's Survey (29 out of 30), New York State Restaurateur of The Year 1998.

In 2007 Peter appeared on the Food Networks Iron Chef America and beat Bobby Flay in Battle "Cowboy Rib Eye", he also played host to Anthony Bourdain on his "No Reservations" program, introducing Tony to the beauty of the Hudson Valley. In 1999, Peter assembled a "dream team" of culinary "superstars" and became the founding chef and culinary director for Impromptu Gourmet, a revolution in home dining.